THE FIRST EVER POSITION SPECIFIC HELMET. BUILT FOR LIFE IN THE TRENCHES.
WATCH THE TRENCH UNVEIL VIDEO 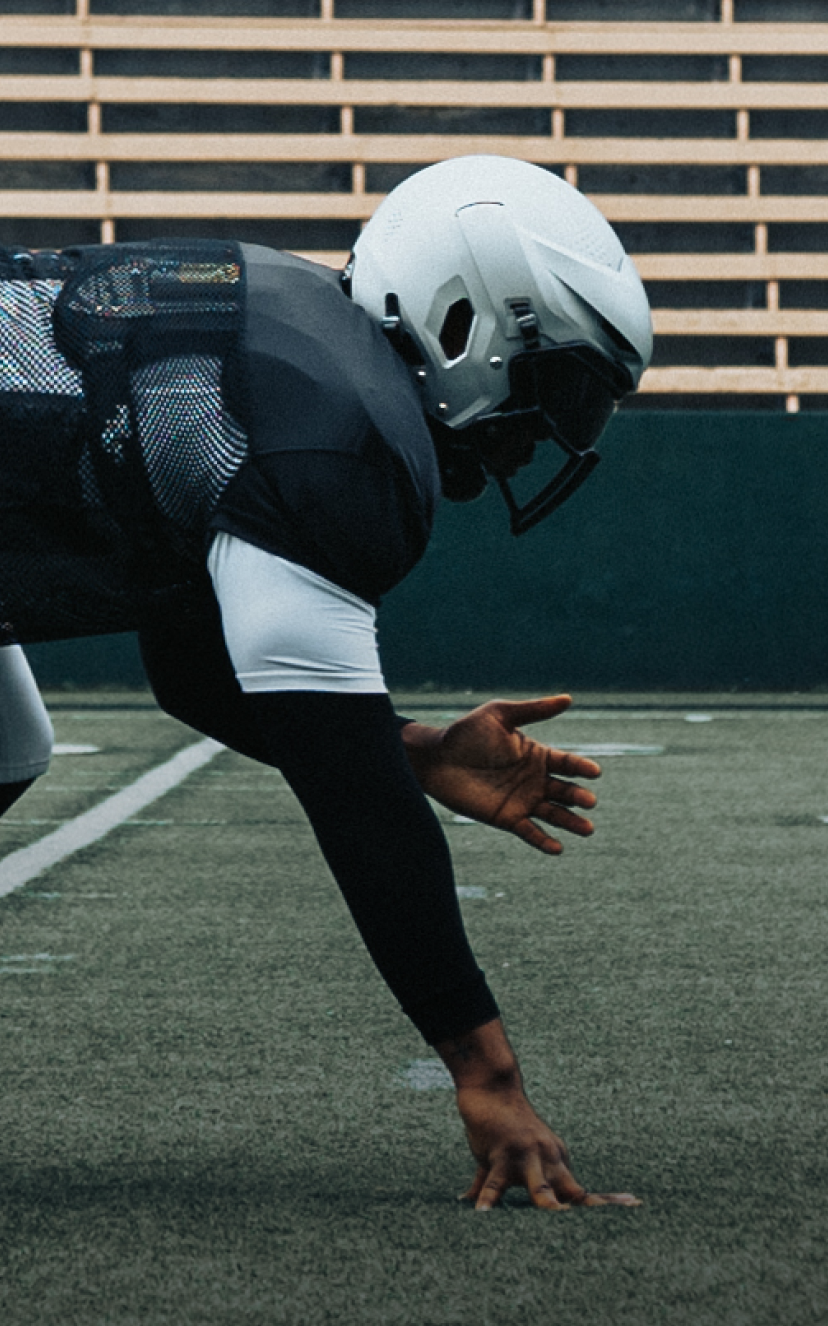 Designed for Linemen, the additional offset of the TRENCH helmet in the front and upper side is designed to mitigate repetitive low velocity impacts (2-4 m/s).
STARTING AT $799
RESERVE YOUR ZERO2 TRENCH

The ZERO2 TRENCH recorded the top-rating in the Virginia Tech helmet rating system, out performing every other helmet tested AND IMPROVING ON THE STANDARD SETTING ZERO2*

UP TO 35% REDUCTION IN ACCELERATION AT LOW VELOCITY IMPACTS

(As compared to the standard ZERO2)*
Linemen experience more than twice as many impacts as other players, with the largest percentage of hits to the front of the helmet.¹ The majority of those impacts are low velocity between 2.1 and 4.5 m/s.² Based on this data, the TRENCH helmet was designed with additional offset in the frontal region, specifically tuned for low velocity impacts. To complete this optimization, VICIS leveraged the combination of a deformable outer shell and engineered impact structure.

The VICIS TRENCH uses the ZERO2 as its base, which has been designed from the ground up for 2021. Guided by the latest helmet testing protocols, the base ZERO2 was optimized for the complete range of impacts, low to high velocity. 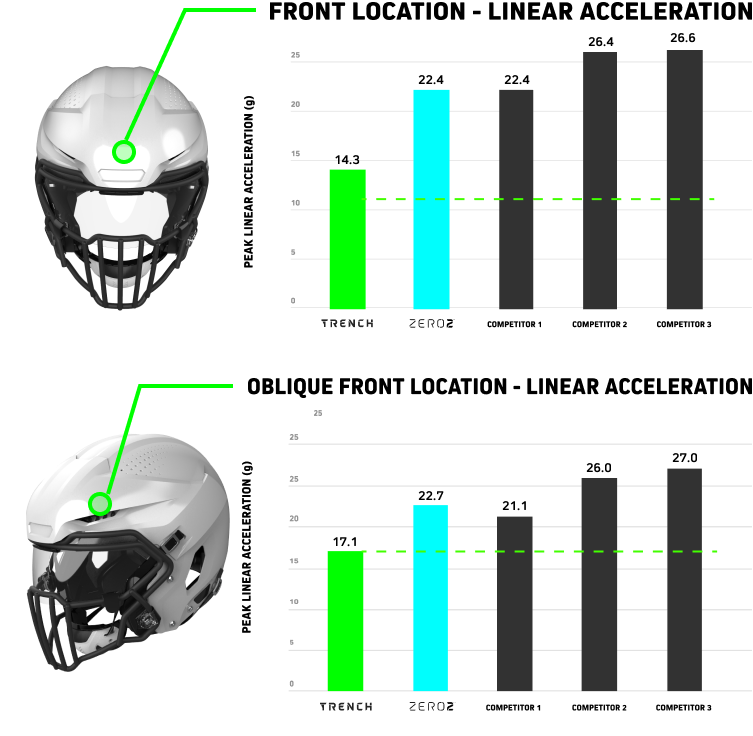 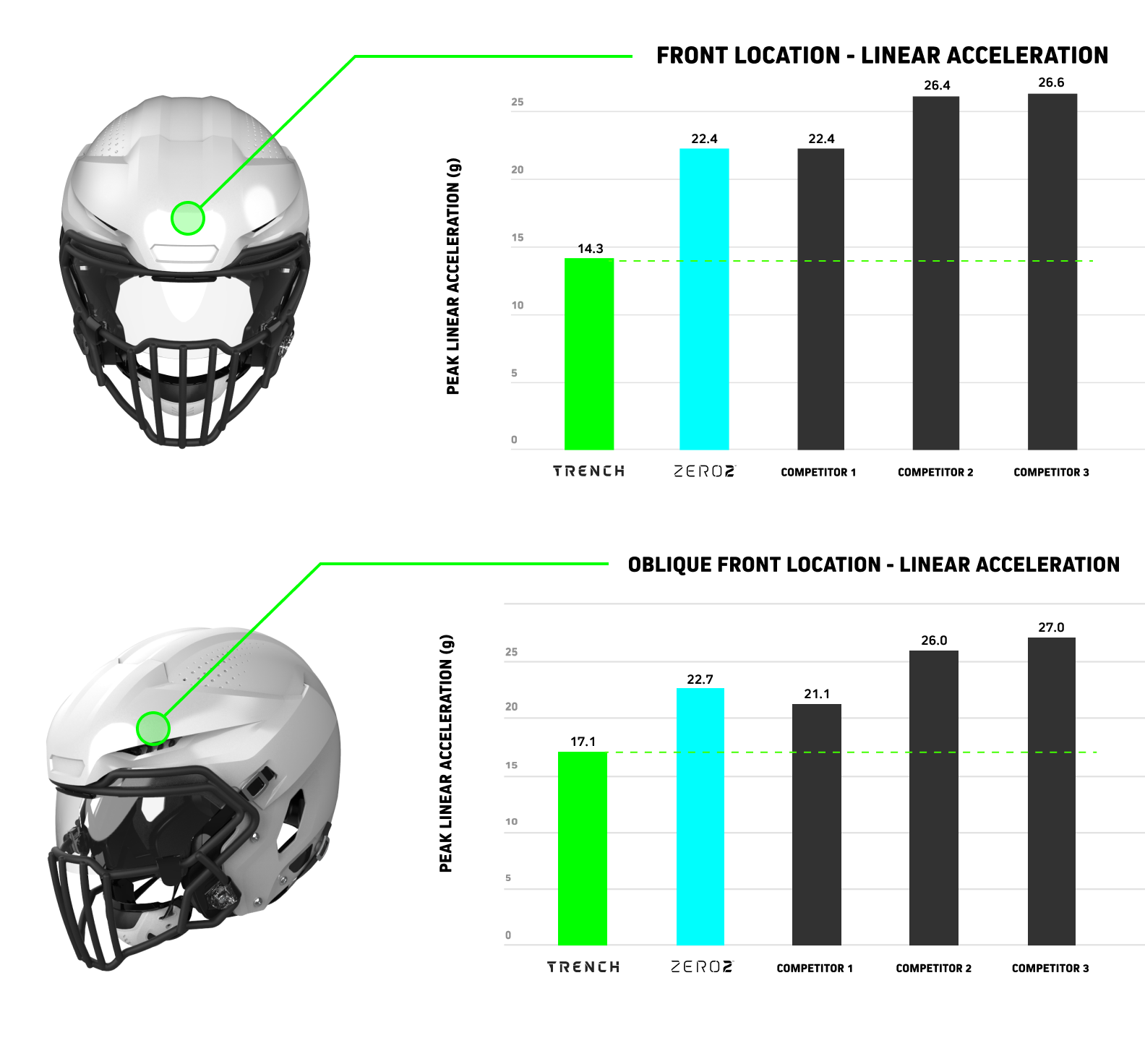 *Testing was performed on a single sample helmet of each type at an independent testing laboratory. Testing was completed using a pneumatic ram impactor as used during the NFL/NFLPA helmet testing protocol. The helmets were impacted twice in each location at 3 m/s and an average peak acceleration is recorded.
‍
(1) Crisco, J. J. et al. (2011). Head impact exposure in collegiate football players. Journal of Biomechanics, 44(15), 2673–2678. doi: 10.1016/j.jbiomech.2011.08.003. https://pubmed.ncbi.nlm.nih.gov/21872862/

NO HELMET SYSTEM CAN PREVENT CONCUSSIONS OR ELIMINATE THE RISK OF SERIOUS HEAD OR NECK INJURIES WHILE PLAYING FOOTBALL.

Using the same fit system as the VICIS ZERO2, DLTA pods deliver the new VICIS standard for customized comfort and a secure fit without air bladders. Interchangeable pods snap in and out of six locations, with five thicknesses available. 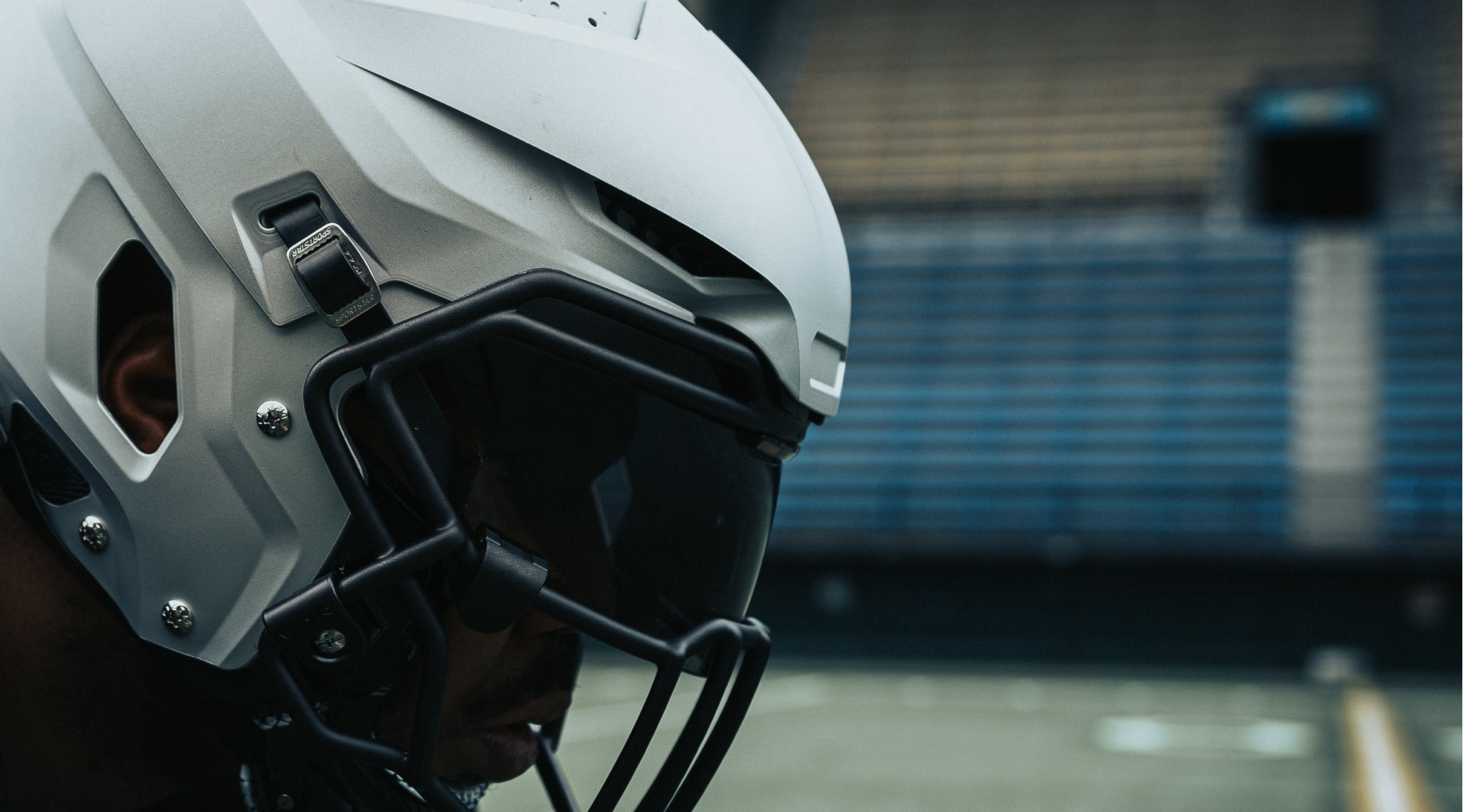 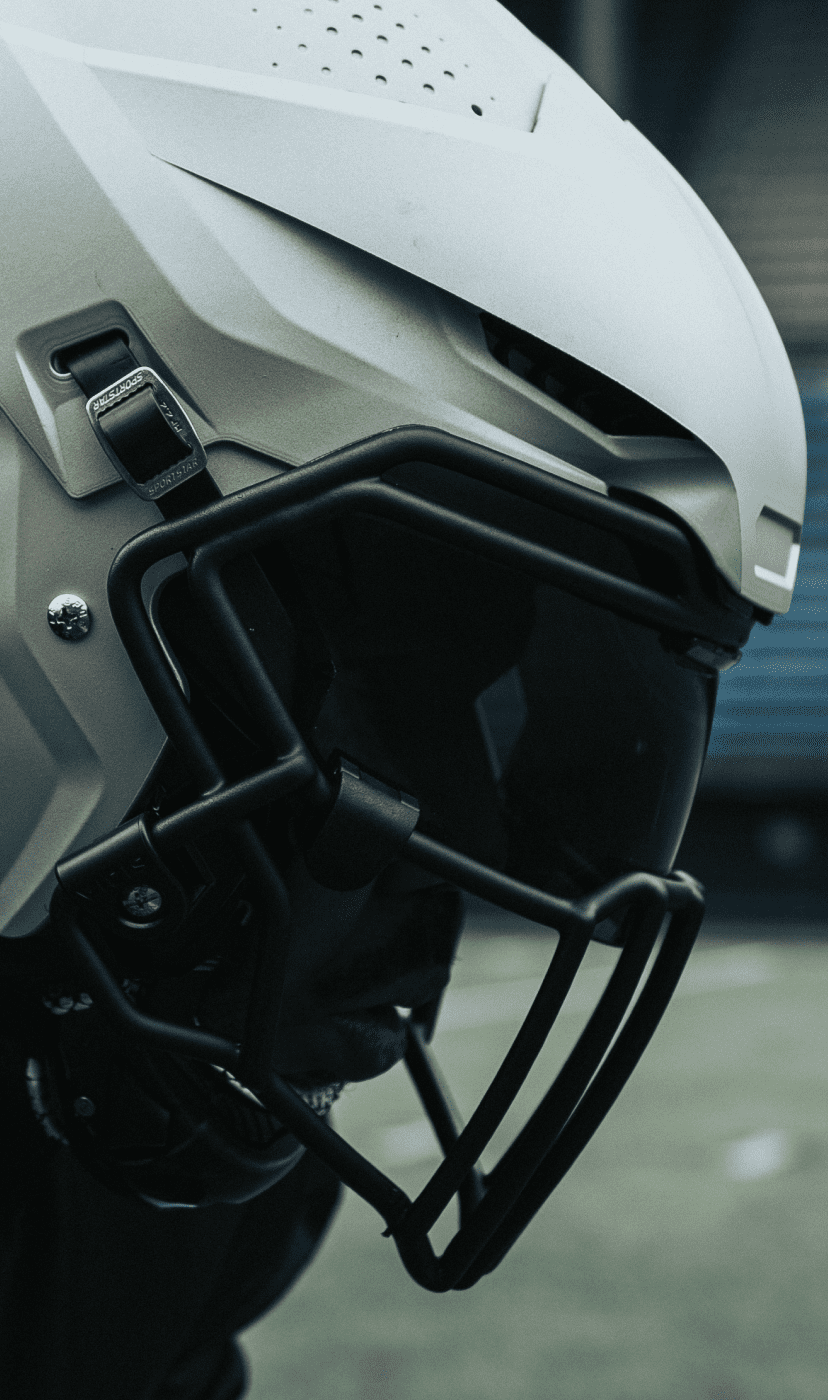 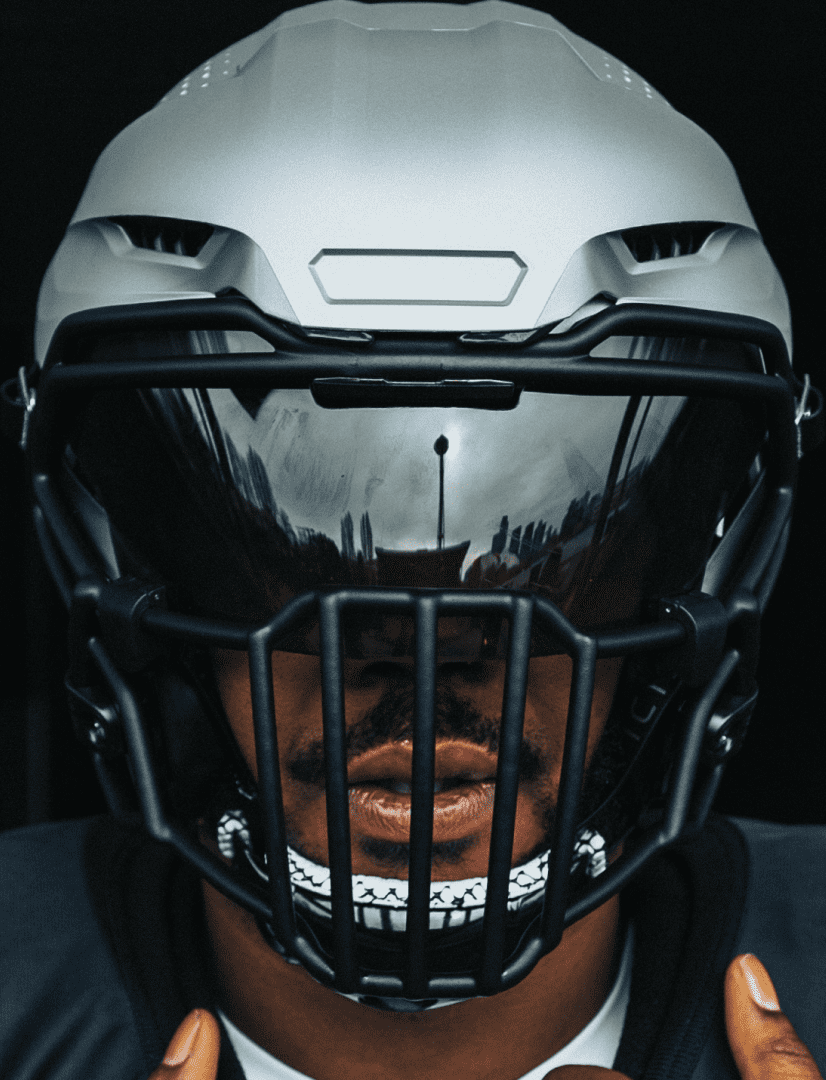 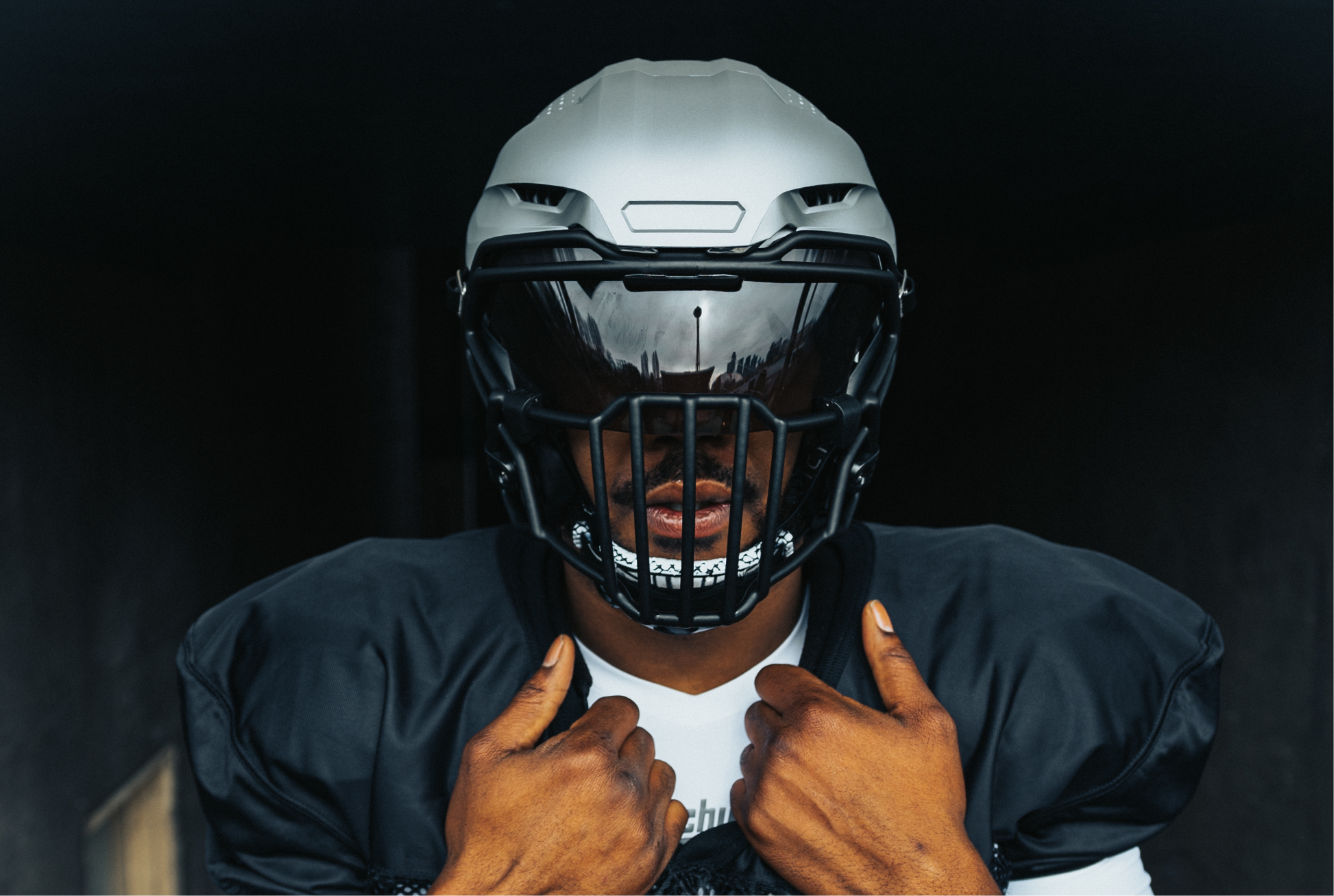 Introducing the SO-215T, a new mask design available excusively for the ZERO2 TRENCH. 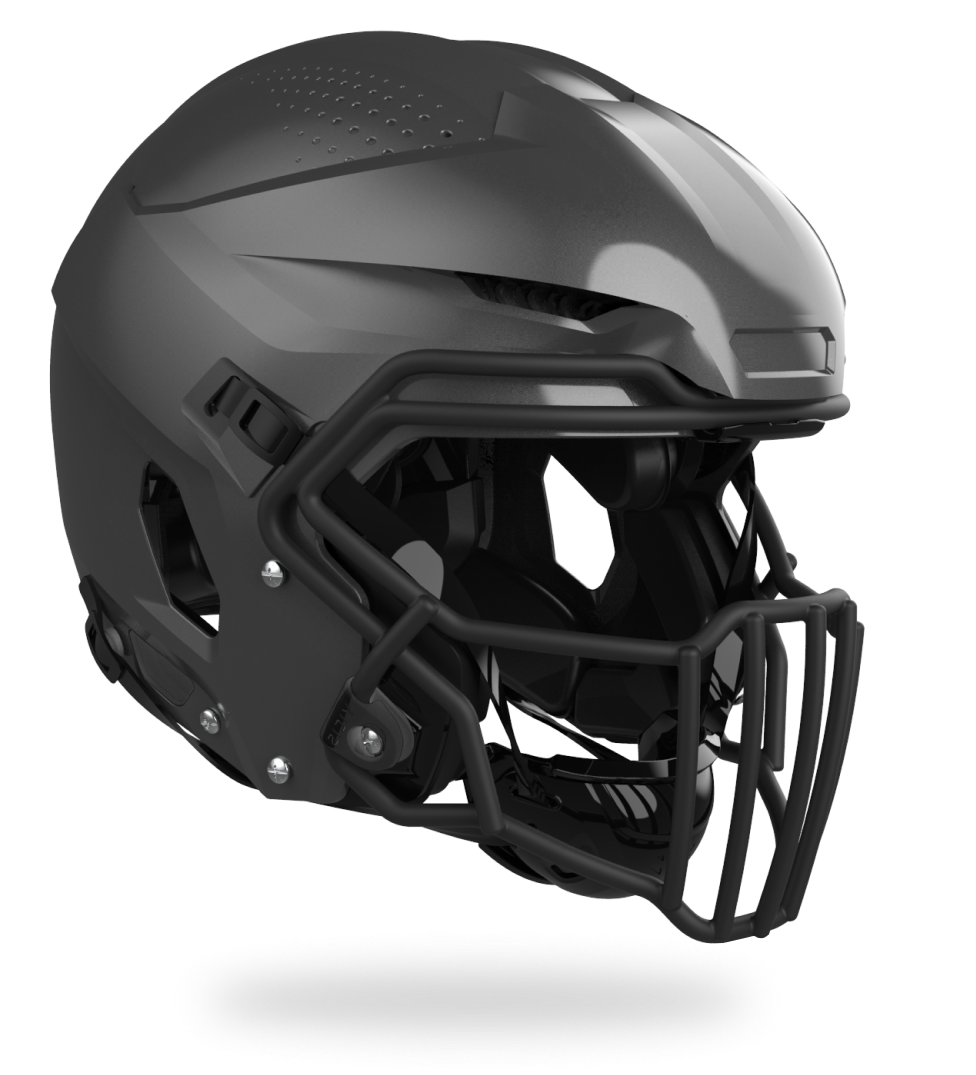 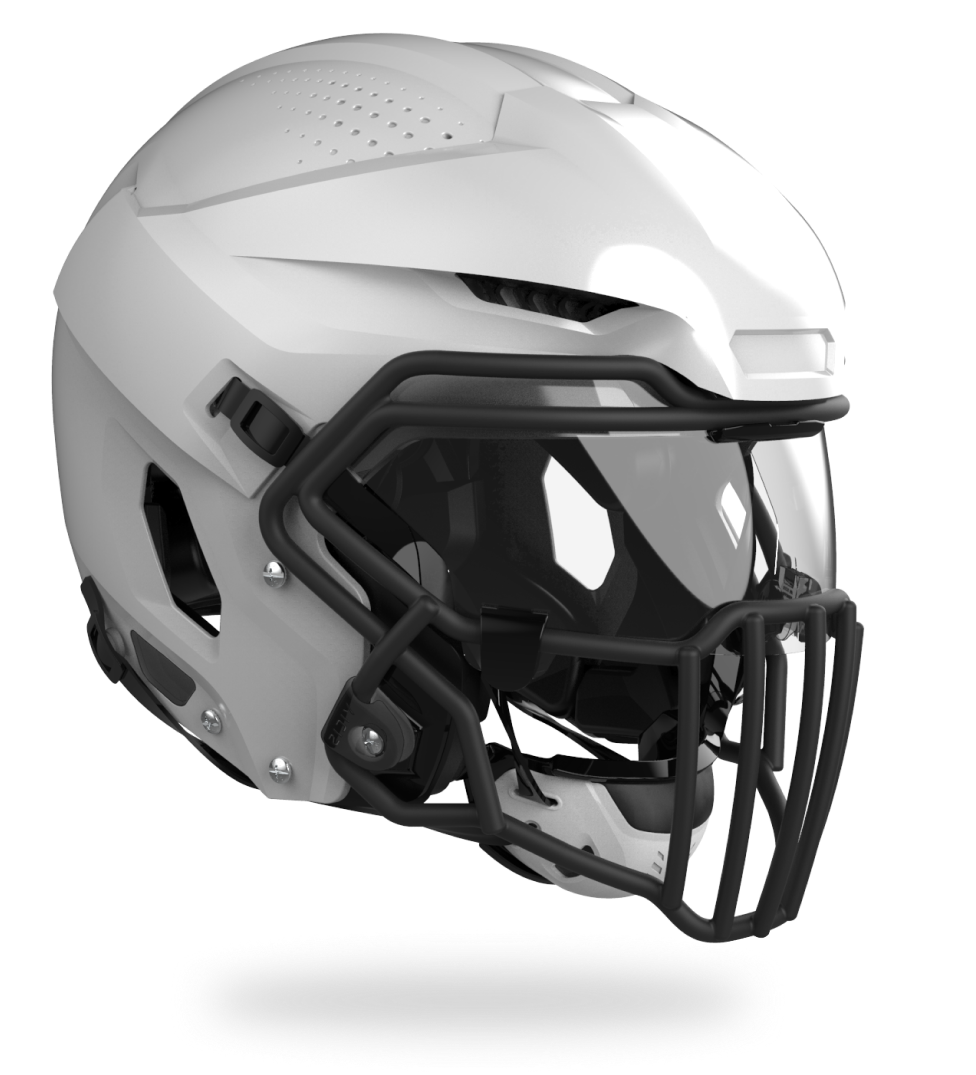 The ZERO2 ELITE features the same top-rated protection, with an upgraded feature set. 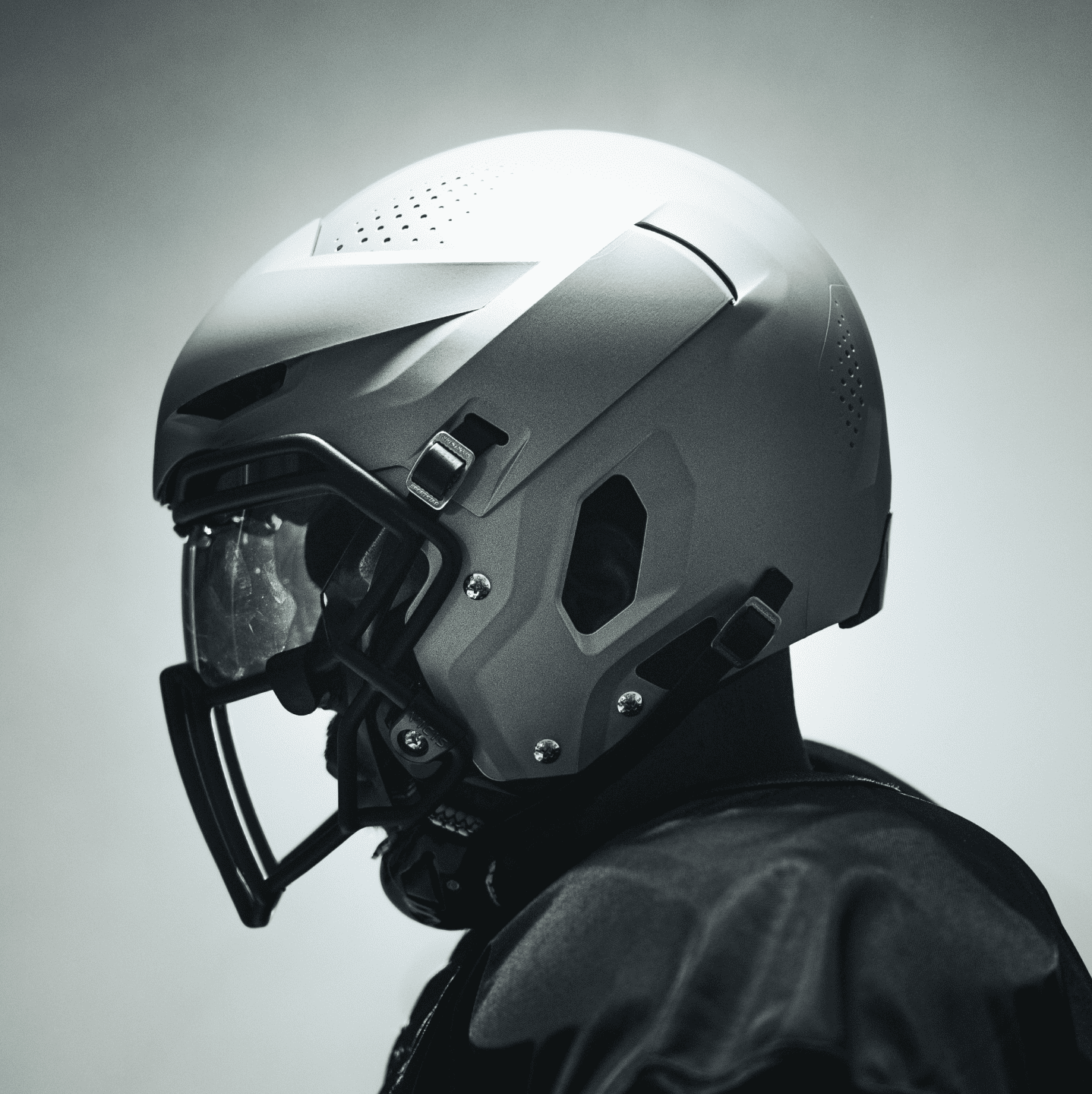 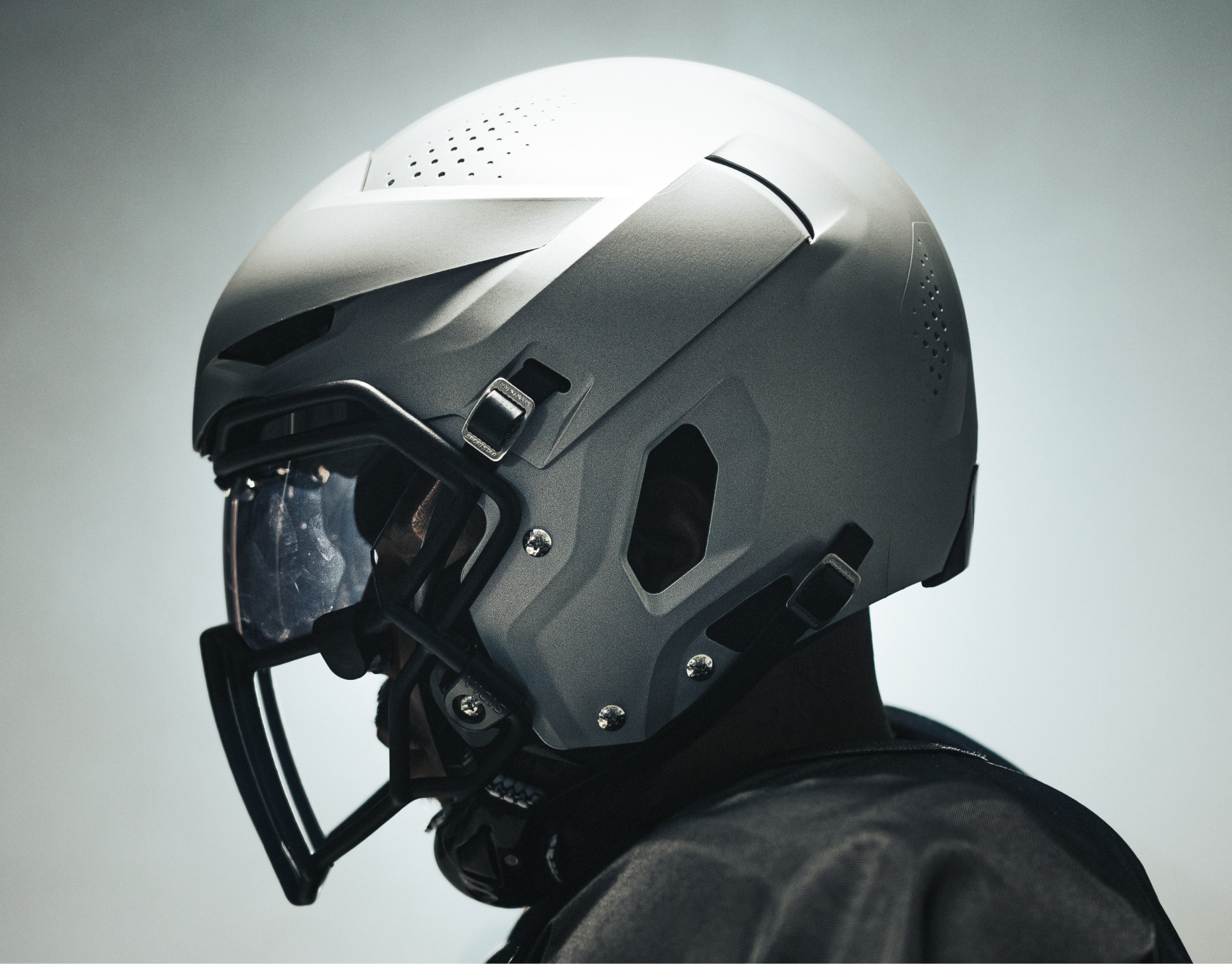 ADDITIONAL OFFSET FOR
EVERY PLAY PROTECTION

Flexible outer shell technology, exclusive to VICIS helmets, allows the ZERO2 to respond like no other helmet on the market. By deforming like a car bumper, impact forces are absorbed at the point of contact, before they reach the head. Combined with the additional offset and proprietary structure of the TRENCH, the result is improved impact mitigation for every type of hit.

A limited amount of ZERO2 TRENCH units are available for reservation. To reserve your TRENCH helmet, please complete the form in the link below.

The first ZER02 TRENCH units begin to ship May 15, 2021, and as we near that date, a VICIS representative will reach out with details to complete your order. No payment or funds are required at this time to reserve your ZERO2 TRENCH.
RESERVE YOUR ZERO2 TRENCH

WHEN WILL THE FIRST ZERO2 TRENCH HELMETS SHIP?
The first ZERO2 helmets will begin to ship out beginning May 15, 2021. If you register for a pre-order, a VICIS Represenative will follow up to complete your order and will provide more availability details at that time.
CAN I ORDER THE TRENCH AS A SEPARATE PART TO ADD TO MY CURRENT ZERO2?
At this time, the ZERO2 TRENCH is only available as a complete helmet build.
IS THE TRENCH REMOVABLE?
The TRENCH unit can only be removed during reconditioning.
WHAT SIZES ARE AVAILABLE?
The ZERO2 TRENCH will be available in Large and X-Large sizes.
I HAVE A QUESTION ABOUT RESERVING A HELMET, WHO DO I CONTACT?
For any questions about pre-order reservation, please contact us at info@vicis.com
WILL A ZERO1 EDGE SHIELD FIT THE ZERO2?
Yes, the new EDGE Shield was uniquely designed to fit the ZERO2 and ZERO2 TRENCH. Previous EDGE Shield models designed for the ZERO1 will not fit the new ZERO2 helmets.

To reserve your helmet, please complete the registration form below. Following registration, you will receive an email confirming that your name has been registered on our list for early access. As we near the first ship date for helmets (May 15, 2021) a VICIS representative will follow up to complete your order. No payment or funds are required at this time to reserve your place in line for the ZERO2.

Thank you! Your submission has been received!
Oops! Something went wrong while submitting the form.
FOR MORE FREQUENT UPDATES, FOLLOW VICIS ON SOCIAL MEDIA

PLEASE USE THE FORM BELOW FOR  TEAM ORDER INQUIRIES

Following completion of the form, a VICIS representative will contact you about VICIS team order options.

Thank you! Your submission has been received!
Oops! Something went wrong while submitting the form.
FOR MORE FREQUENT UPDATES, FOLLOW VICIS ON SOCIAL MEDIA